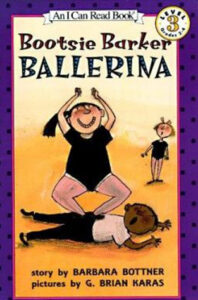 Bully Bootsie Barker (Bootsie Barker Bites, 1992) returns, this time in the I Can Read series; subtle stereotypes, depicted by a different illustrator (Peggy Rathmann illustrated the original) detract from the humor that made Bootsie a villain readers loved to hate.
Lisa asks her friend Bernie to attend ballet class with her because she’s afraid of encountering Bootsie. Bootsie spies Bernie and announces, “I HATE ballet,” adding, “I hate boys even more.” Dance class goes down the tubes, as Bootsie muscles her way through pliÇs and relevÇs. When Bootsie dances out her version of a tornado, Bernie and Lisa let her spin her way right out the door. Bernie’s constant seeking of reassurances about ballet class from his basketball coach comes across as apologetic, making ballet a means to improving his game, instead of an end in itself. Bootsie’s unrelenting meanness works as well here as it did in her debut, but Karas’s illustrations throw the story off: In a classroom where all the other students are relatively small and thin, Bootsie is fat; her bullying becomes synonymous with her size, and sets the stage for mean-spirited associations between looks and behavior. (Picture book. 5-7)
BUY